The shifting focus of the Armenian Cause

The issue of the Armenian Genocide did not manifest any regular political expression until the late 1960s. The Armenian Cause, as it has come to be known (Hai Tahd in Western Armenian; Hai Daht in Eastern Armenian), followed mass demonstrations in particular in 1965. That was the 50th year marking the arrest of notable Armenians in İstanbul on April 24, which heralded the massacres and deportations that followed Surprisingly, rallies took place in Yerevan in Soviet Armenia in 1965, running contrary to the anti-national policies of the USSR. It did not take long for communities within the organized Armenian diaspora to take on the mantle of genocide recognition as their primary raison d’être.1 END_OF_DOCUMENT_TOKEN_TO_BE_REPLACED

The final frontiers: The various borders between Armenia and Turkey

For many in the US and fans of its pop culture, the expression ‘the final frontier’ is immediately associated with TV shows and movies set in the future, following the adventures of a spaceship on its explorations of the far reaches of the galaxy. Today, and on this very planet, a kind of frontier exists that has not quite reached its finality and that finds itself drawing more than one line — the border between Armenia and Turkey.

That the Armenian and Turkish peoples have historical baggage between them is not news. One reason for that phenomenon is the fact that different pieces of territory that have over the course of millennia been referred to as “Armenia” are located in areas that make up present-day Iran, Azerbaijan and Georgia, even Syria and Iraq, apart from the Republic of Armenia itself. But, for the most part, the places that bear some Armenian heritage or other fall within Turkey today — and that heritage is almost entirely ignored, incessantly facing disrepair or purposeful destruction. The neglect becomes more evident when contrasted with the care given to the rich Ottoman heritage present in the country.

It is the past century in particular that has generated and sustained friction between Armenians and Turks. This is unsurprisingly accounted for by the historical legacy of the massacres and deportations of Armenians and other Christians of Asia Minor and Anatolia that took place in the late 19th and early 20th century, as the Ottoman Empire was drawing to a close and the Republic of Turkey was entering the arena of history. The qualification of that time period is disputed. Referred to as the Armenian genocide by most outside of Turkey and Azerbaijan, the characterization of “genocide” is disputed within the Turkish narrative. END_OF_DOCUMENT_TOKEN_TO_BE_REPLACED

Turkish Review occasionally opens its doors to students from outside Turkey, inviting them to stay for brief internships at our journal. This summer we were joined by Nareg Seferian, a young Armenian of Marashtsi lineage (that is, with Armenian roots in Ottoman Maraş) who received his education in India, Armenia and the US, where his studies have focused on law and diplomacy. During his time with Turkish Review, Nareg visited his ancestral town of Marash/Maraş. This is his account of that journey. END_OF_DOCUMENT_TOKEN_TO_BE_REPLACED

‘Democracy, Islam, and Secularism in Turkey’, By Ahmet T. Kuru and Alfred Stepan

‘Democracy, Islam, and Secularism in Turkey’ features eight essays born out of two major conferences at Columbia University. Editors Kuru and Stepan address key questions in exploring the concept of state-religion relations in the context of Turkey’s evolving democracy: What place does religion have in public life? Does it even need to be addressed, and, if so, how can it be accommodated?

Let it be said once more: Turkey has changed a lot in recent years, especially over the course of the past decade. Alongside the nation’s economic growth, its society has witnessed significant transformations that have affected the way it views itself, as well as the way the world sees it.

What the Justice and Development Party (AK Party) has brought about is not simply policies that encourage the generation of wealth or more proactive steps in diplomacy. Turkey is undergoing a philosophical shift. Things are changing in a way that does not just make people feel better about themselves as Turks or as citizens of Turkey; rather, they are being made to re-evaluate the very basis of the Turkish state — what it means, where it has been, where it is headed. And that is not always an easy task, especially given étatisme’s importance as a tenet in the foundation and organization of the Republic of Turkey. Questioning the heretofore unquestionable can provoke powerful challenges. END_OF_DOCUMENT_TOKEN_TO_BE_REPLACED 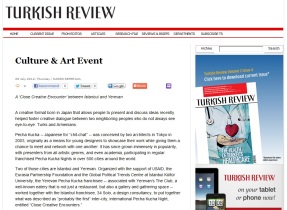 A ‘Close Creative Encounter’ between İstanbul and Yerevan

A creative format born in Japan that allows people to present and discuss ideas recently helped foster creative dialogue between two neighboring peoples who do not always see eye-to-eye: Turks and Armenians.

Pecha Kucha — Japanese for “chit-chat” — was conceived by two architects in Tokyo in 2003, originally as a means for young designers to showcase their work while giving them a chance to meet and network with one another. It has since grown immensely in popularity, with presenters from all artistic genres, and even academia, participating in regular franchised Pecha Kucha Nights in over 500 cities around the world.

Two of those cities are İstanbul and Yerevan. Organized with the support of USAID, the Eurasia Partnership Foundation and the Global Political Trends Centre at İstanbul Kültür University, the Yerevan Pecha Kucha franchisee — associated with Yerevan’s The Club, a well-known eatery that is not just a restaurant, but also a gallery and gathering space — worked together with the İstanbul franchisee, 34 Solo, a design consultancy, to put together what was described as “probably the first” inter-city, international Pecha Kucha Night, entitled “Close Creative Encounters.” END_OF_DOCUMENT_TOKEN_TO_BE_REPLACED