A Versatile Language is One Key to Survival 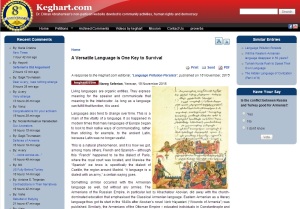 Living languages are organic entities. They express meaning for the speaker and communicate that meaning to the interlocutor. As long as a language can fulfill that function, it is used.

Languages also tend to change over time. This is a mark of the vitality of a language. It so happened in modern times that many languages of Europe began to look to their native ways of communicating, rather than sticking, for example, to the ancient Latin, because Latin was no longer useful.

This is a natural phenomenon, and it is how we got, among many others, French and Spanish – although this “French” happened to be the dialect of Paris, where the royal court was located, and likewise the “Spanish” we know is specifically the dialect of Castile, the region around Madrid. “A language is a dialect with an army,” a certain saying goes.