Disclaimer, based on feedback: All major points and basic information are covered, but some exceptions and other nuances also exist.
_______

Hello, and thank you for watching this video on the regular differences in pronunciation between Western Armenian and Eastern Armenian.

The Armenian language has one, unique alphabet, as you can see.

Although, for most educated Armenians, each is mutually-intelligible with the other, there certainly are differences in vocabulary (in words), grammar, and even in orthography, due to Soviet-era spelling reforms.

But the most immediate difference is in sounds — the pronunciation of letters.

It boils down to these five sets of three letters. END_OF_DOCUMENT_TOKEN_TO_BE_REPLACED 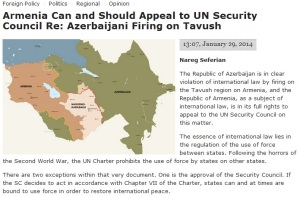 Armenia Can and Should Appeal to UN Security Council Re: Azerbaijani Firing on Tavush