On September 27, fighting over the disputed territory of Nagorno-Karabakh in the Caucasus broke out on the greatest scale since the cease-fire of 1994. Amid an unstable situation developing in the former Soviet space at the cusp of eastern Europe and the Middle East, the University of North Texas and the School of Public and International Affairs at Virginia Tech held an online discussion about the facts on the ground, the key local and regional players including Azerbaijan, Armenia, the de facto Nagorno-Karabakh Republic, Russia, Turkey, the EU, and the United States, as well as the role of civil society and development efforts in the face of the conflict.

Too often the Karabakh conflict is reported in the Western media with great emphasis on oil and gas pipelines. While energy infrastructure is indeed a significant component of that complex issue, the rhetoric from the political leaders and from common voices in the region hinge overwhelmingly around national identity, historical narratives, and symbolism.

For example, the President of Azerbaijan complained in his interview on Al Jazeera English that towns and villages in the region have been re-named in the past decades. Now we see that the Azerbaijani armed forces claim to have taken over the village of Mataghis/Madagiz and Ilham Aliyev’s official Twitter account very soon proclaims a new name for it, rather – “I reinstate the historical name … Sugovushan”.

It is difficult to avoid drawing parallels between the political developments that took place in Armenia in 2018 and the ongoing events in Belarus. There are significant overlaps, but also substantial differences.

One major difference is in the leadership. Nikol Pashinyan had a long track record as a journalist, opposition activist, and politican, a visible part of street protests that had characterised politics in Armenia since the mid-2000s. He and his team had quite clear methods and tactics in 2018, drawn from years of experience.

I do not know enough about Belarus, but, from as much as I can follow, it seems that the movement is more sporadic, led by Sviatlana Tsikhanouskaya who was unexpectedly thrust onto the scene because of political machinations targeting her husband. It is a different dynamic, even though – quite clearly – both in Armenia in 2018 and in Belarus in 2020, a large proportion of the population expresses the same demand of changing entrenched political leadership. 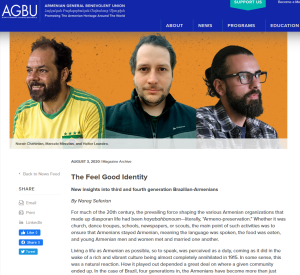 For much of the 20th century, the prevailing force shaping the various Armenian organizations that made up diasporan life had been hayabahbanoum — literally, “Armeno-preservation.” Whether it was church, dance troupes, schools, newspapers, or scouts, the main point of such activities was to ensure that Armenians stayed Armenian, meaning the language was spoken, the food was eaten, and young Armenian men and women met and married one another.

Living a life as Armenian as possible, so to speak, was perceived as a duty, coming as it did in the wake of a rich and vibrant culture being almost completely annihilated in 1915. In some sense, this was a natural reaction. How it played out depended a great deal on where a given community ended up. In the case of Brazil, four generations in, the Armenians have become more than just inhabitants in a host country, rather they are fully actualized citizens of a nation, if not citizens of the world.

All states have their iconographies and rituals designed to project their legitimacy and power. They organize space as sacred patrimony and time as memory, anniversary and the eternal. Presidential inaugurations are occasions where we see this process in scenarios and ceremonies of power. The United States has an oath-taking in front of dignitaries and a majestic Capitol building. France and Russia have public ceremonies featuring the journey of the elected leader to regal buildings of power, these very setting and their elaborate interior décor signifying a treasured and transcendent patrimony of the nation and state.

It is hardly a surprise that de facto states – states that have established territorial control and internal legitimacy in a contested region, but lack recognition in external legitimacy as states among other states in the international community – look to the ceremonies of established states when inventing their own ceremonies of power. How they do so is an interesting window into their prevailing constructions of the time-space of their visions of their territorial nation-stateness. 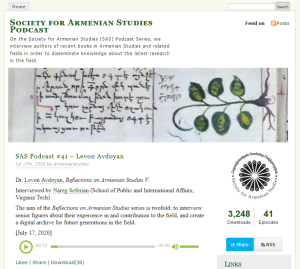 The aim of the Reflections on Armenian Studies series is twofold: to interview senior figures about their experience in and contribution to the field, and create a digital archive for future generations in the field.

listen to the podcast

A Couple of Notable Words in Arayik Harutyunyan‘s Inaugural Address

The fourth president of the self-proclaimed Republic of Nagorno-Karabakh or Artsakh took his oath of office on Thursday, May 21. There are many observations that could be made about the ceremony – the broadcast and the narrative it creates, how it portrays and situates the new leader, Arayik Harutyunyan, within it, the implicit and explicit context created by the visuals, locations, and music, alongside the protocols surrounding the inauguration.

I was drawn to one paragraph in Harutyunyan’s speech: A Statue of Mahatma Gandhi is Welcome in Yerevan

Patrick Azadian puts forward some meaningful arguments in his article against the plan for a statue of Mahatma Gandhi in Yerevan. Gandhi’s political legacy is indeed controversial. As Azadian outlined, the Indian National Congress led by Gandhi supported the Khilafat Movement in the early 1920s as a platform for co-operating with the large Muslim population in the country. They were protesting the limitations placed by the colonial powers on the Ottoman Sultan – who served as Caliph, or head of Sunni Islam – as the empire was collapsing. (Once Mustafa Kemal came to power and established a secular republic in Turkey, he abolished the caliphate outright, so that movement subsided.) For Armenian nationalists, Gandhi’s association with the Khilafat Movement could be a sore point.

“Our hero enlightens himself on a topic that he really should know more about. Lets get educational.

Less lols this week but much more interesting and hopefully y’all can learn something.

As we hear in this episode, I personally, had never heard of the Armenian genocide. But years ago, outside a bar in Berlin – I heard someone reference it. And since then, it has kind of just stayed in my memory without really learning much about it.

listen to the podcast